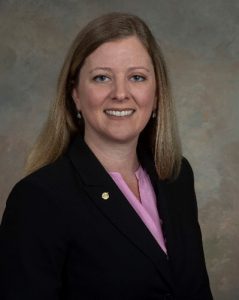 Named to the position in July 2022, she assists in leading the organization responsible for projects and programs in support of the Science Mission Directorate and Space Technology Mission Directorate. This includes the Planetary Missions Program Office, the Technology Demonstration Missions Program Office, deep space and planetary exploration, fundamental research in heliophysics, astrophysics, and Earth science, and technology development, including Centennial Challenges and Technology Transfer.

The office also leads the pursuit of new partnership opportunities with other government agencies and private industry. Ise helps oversee an annual budget of more than $200 million and manages a diverse, highly technical workforce of approximately 300 civil service and contractor employees.

Ise was previously project manager for Space Nuclear Propulsion at Marshall from 2021, which included both the nuclear thermal and nuclear electric propulsion projects. She oversaw the award of three industry contracts for preliminary design of a nuclear thermal rocket engine reactor.

Ise was named division chief in the Systems Development, Integration, and Test Division in the Engineering’s Space Systems Department in 2019. In that position, she managed the Environmental Control and Life Support System group and the test group for International Space Station payloads and System Integration Lab testing.

She was named program executive for Technology Demonstration Missions at NASA Headquarters in Washington in the Space Technology Mission Directorate in 2018. Ise was named deputy launch vehicle manager for the Commercial Crew Program in 2011.

From 2008 to 2011, she was integrated product team lead for systems and Assistant Chief Engineer on Ares Upper Stage on the Constellation Program. Ise was named engine systems lead for RS-68 on Ares V in 2006. She started her NASA career in 2000 as an engine systems data analyst and modeler for space shuttle main engine. Her awards include a Silver Snoopy and a NASA Certificate of Appreciation.

A native of Joliet, Illinois, Ise received a bachelor’s degree in mechanical engineering from the University of Alabama in Huntsville. She and her husband, Carl, live in Huntsville with their two sons, Sven and Charles.